You are here: HomenextNewsnextMeetingsnextThe Oxford Canal and its People – Oxfordshire FHS Talk – 23 July 2018 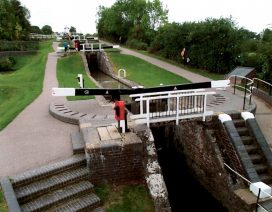 On Monday, 23 July, Muriel Pilkington will talk to Oxfordshire FHS on:

The Oxford Canal and its People

The speaker often goes to Oxford and is fascinated by its history. One aspect of that history, that has nothing to do with the university, is the Oxford Canal. She spent a fascinating six months researching the story of the development, heyday and decline of canals in England in general and the Oxford Canal in particular. The talk first looks at how canals have developed in the past two millennia , and then it focuses on their importance to the development of the industrial revolution in this country. The need to build bridges, cut tunnels, build aqueducts meant that huge engineering expertise and innovation evolved. The canal companies were the ancestors of the development of numerous companies and financial speculation that were such a feature of the nineteenth century. The Oxford canal serves as a good illustration of the role played in the way that canals formed a national network for the distribution of goods in a way that had never been possible before. It also looks at the men, women and children who spent their lives working on the canals and finally it speculates about the possible future of this fascinating part of the national infrastructure.

Muriel Pilkington read history at Oxford University and then began a career in teaching. Apart from some time off for having a family, she worked in schools for well over 30 years, ending as head teacher of Wycombe High School, a post she held for 12 years. Although her love of history continued, she inevitably became increasingly interested in education. She was awarded two Certificates of Advanced Professional Studies in Education at the Cambridge Institute and an Honorary Doctorate at the Bucks New University in 2006 for services to education. She was active in the Association of School and College Leaders and was the president of the Bucks, Berks and Oxon section. She also served as governor in a range of educational institutions including vice chair of a university senate, membership of the council of a drama school, chair of a Pupil Referral Unit and four governorships of schools in Buckinghamshire. She now works as an educational consultant and writer for a national centre for education management. After her retirement, she has returned to her pet subject of history and started giving talks to a variety of societies and other institutions and clubs, giving her fees to charity. She is also a fairly active supporter of her Oxford college. After retiring, she and her husband relocated to Witney in Oxfordshire and used some of their proceeds from the sale of their former house in Buckinghamshire to acquire a presence in France. They belong to a variety of groups in each town. Her husband is an active member of the Lions club in Witney and in France and Muriel helps their work in both towns. They are sponsors of the Oxford Philharmonic Orchestra.