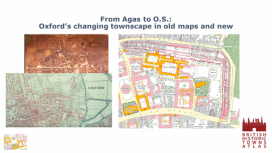 On Monday, 25 November, Nick Millea will talk to Oxfordshire FHS on:

From Agas to Ordnance Survey: Oxford’s changing townscape in old maps and new

Nick Millea has been Map Librarian at the Bodleian Library in Oxford since 1992. He had previously been Map Curator at the University of Sussex. He obtained his undergraduate degree at the University of Newcastle upon Tyne and a Postgraduate Diploma in Librarianship at Manchester Polytechnic. He is a Fellow of the Royal Geographic Society and has been and still is involved in various other cartographic institutions. He is the author of a number of publications including the Gough Map in 2007. He has curated a number of exhibitions in the Bodleian Library. The latest, Talking Maps, opened to the public in the Weston Library in Oxford in July this year.

We meet at the Exeter Hall, Oxford Road, Kidlington, OX5 1AB, with the talk starting at 8:00pm. Doors open at 7:15pm, when there will be advisors offering computer and genealogy help. Tea and coffee will be available. Non-members are very welcome, though we have a charge of £2 as an entrance fee for them to contribute towards the hire of the hall and the costs of speakers.