You are here: HomenextNewsnextMeetingsnextHuguenots in the British Isles - Oxfordshire FHS Talk - 24 July 2017 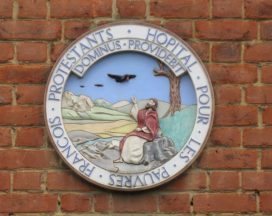 On Monday, 24 July, Kathy Chater will talk to Oxfordshire FHS on:

Huguenots in the British Isles

Five hundred years ago Martin Luther’s protests against the corruption of the Roman Catholic Church of his day sparked religious controversy all over Europe. The Protestants in France, called Huguenots, were among the many waves of refugees from persecution who have over the centuries sought shelter in the British Isles. Many people have a family story of descent from them. How do you go about seeing if the story is true?

Kathy Chater has been tracing her own ancestry for nearly forty years. She is the author of Tracing Your Huguenot Ancestors (2012) and The Reformation in 100 Facts (2016) Her doctoral thesis was published as Untold Histories: Black People in England and Wales during the British Slave Trade (2009) and she has also writtenTracing Your Family Tree in England, Ireland, Scotland and Wales (2nd ed. 2008) and My Ancestor Was A Lunatic (2014). She contributes articles and reviews on social and family history to magazines and websites.