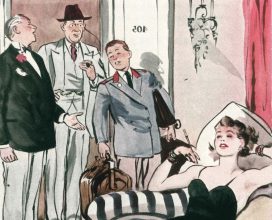 On Monday, 22 July, Rebecca Probert will talk to Oxfordshire FHS on:

It’s very likely that some of your ancestors married more than once over their lifetime. But why precisely? and what can their remarriages tell us? How likely was remarriage after a bereavement, and what social and legal factors affected that decision? Was divorce an easy way out of marriage? If people committed bigamy, what were the likely consequences for all concerned? Drawing on thousands of cases, from the Old Bailey to magistrates’ courts, this talk provides new research findings on the nature and extent of remarriage in past centuries and decades to help family historians interpret their ancestors’ lives.

Professor Rebecca Probert began researching her family tree as a teenager and built on this interest in her academic zcareer, researching large-scale cohorts for her monographs Marriage Law and Practice in the Long Eighteenth Century: A Reassessment and The Legal Regulation of Cohabitation: From Fornicators to Family, 1600-2010, both published by Cambridge University Press. She now teaches family law at the University of Exeter and has written on all aspects of modern family law, as well as the history of marriage, divorce, cohabitation and bigamy. She has also appeared numerous times on TV and radio, including Heirhunters; Harlots, Heroines and Housewives; Historic Houses; A House Through Time and Who Do You Think You Are?

We meet at the Exeter Hall, Oxford Road, Kidlington, OX5 1AB, with the talk starting at 8:00pm. Doors open at 7:15pm, when there will be advisors offering computer and genealogy help, and tea and coffee will be available. Non-members are very welcome, though we have a charge of £2 as an entrance fee for them to contribute towards the hire of the hall and the costs of speakers.