You are here: HomenextNewsnextMeetingsnextBenson to Bruern – Recent Victoria County History Discoveries from the Chilterns to Wychwood - Oxfordshire FHS Talk - 27 March 2017 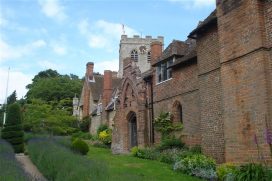 On Monday, 27 March, Simon Townley will talk to Oxfordshire FHS on:

This talk will pick out some of the highlights from the Victoria County History’s recent work on Ewelme Hundred (published in the spring of 2016), and its ongoing work on the Wychwood area. Ewelme Hundred stretched from the Thames around Benson and Warborough to the Chiltern uplands around Nettlebed, with its medieval brick and pottery industry. Ewelme is widely known for its Chaucer connections and its 15th-century almshouses, while Benson was successively an Anglo-Saxon royal centre, a coaching stop, and site of the modern RAF station. The ongoing Wychwood work takes in a dozen parishes in and around the ancient Forest, including Shipton-under-Wychwood and the tiny hamlet of Bruern, where the impact of the medieval abbey is still clearly evident in the local landscape.

Simon Townley started working for the Oxfordshire VCH in 1987, and has been County Editor since 1996, overseeing volumes on Witney, Henley, and the Minster Lovell and Kelmscott areas. He is involved in several county societies including the Oxfordshire Record Society, the Oxfordshire Buildings Record, and the Oxfordshire Local History Association.