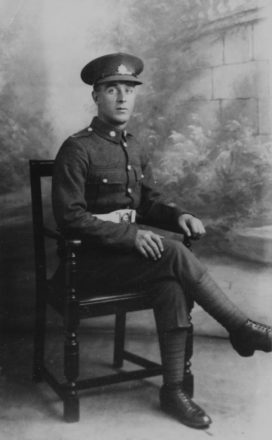 On Monday, 28 November, Tony Hadland will talk to Oxfordshire FHS on:

Tony Hadland’s great-uncle Robert Fisher, born in Bristol, was the son of an Irish soldier. Robert grew up in Co. Donegal and on the British army camp at the Curragh of Kildare, west of Dublin. He became a waiter in London, where he married and fathered two children. In WW1, he joined a local “pals’ regiment” and fought in Flanders, just a few miles from Armentieres. Robert died at “Plug Street” (Ploegsteert), leading a charge and was awarded a posthumous Distinguished Conduct Medal. Robert’s body was never recovered but his brother-in-law, Tony’s grandfather, soon learned of the death, as he was an ambulance driver working nearby. Tony Hadland has visited many of the places Robert Fisher knew, including Plug Street and, in this illustrated talk, he traces the life of this brave young man, who died leaving a widow and two small sons.

Tony spent 13 years in the West Midlands, literally having been sent to Coventry by his employer. He studied architecture at the Oxford School of Architecture and surveying at Reading College of Technology. Tony is a Fellow of the Royal Institution of Chartered Surveyors; a historian specialising in local, family, recusant and cycle history; honorary president of the Moulton Bicycle Club; and chairman of the Oxfordshire Local History Association. Between 2004 and 2009 he was administrator of the Vale & Downland Museum. He has written, edited and contributed to a number of books and has had many articles published in magazines and journals. He has made numerous appearances on radio, particularly in recent years on BBC Radio Oxford, and has also appeared in documentary films and on regional TV. His most recent book, co-authored with Professor Hans-Erhard Lessing, is Bicycle Design: an illustrated history, published by MIT Press. He has a website at hadland.wordpress.com.