You are here: HomenextNewsnextMeetingsnextFrom Trevithick to Barnes Wallis: tracing a family of Cornish engineers, from Camborne to Brooklands, via the sewers of London - talk on 23 February

From Trevithick to Barnes Wallis: tracing a family of Cornish engineers, from Camborne to Brooklands, via the sewers of London - talk on 23 February 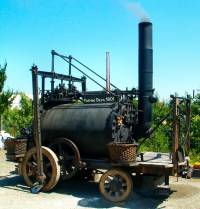 “From Trevithick to Barnes Wallis: tracing a family of Cornish engineers, from Camborne to Brooklands, via the sewers of London”

Tony says that this illustrated talk demonstrates how an engineering tradition survived in a family of Cornish origin from the mid-eighteenth century to the present day. It also shows how, to stay in work as technology developed, this family of engineers had to move from Cornwall to London, Essex and Kent, then Herefordshire, Lincolnshire, Hampshire, Somerset, Norfolk and Surrey, before one of them finally returned to Cornwall in the late-twentieth century. In so doing, they had to adapt their skills from steam engineering to civil engineering and then to
aviation.

In the talk, Tony Hadland shows how his wife’s ancestors worked with Richard Trevithick on Britain’s first steam-powered road vehicle, the “Puffing Devil”. The family was subsequently involved with engineering at Dolcoath, one of the world’s largest mines, and at Perran, a leading Cornish foundry, before moving to London to run Cornish steam engines in the new waterworks installed after the cholera outbreak of the mid 1800s.

Subsequently, the family was involved in civil engineering for the Admiralty. Then came aviation and Tony’s father-in-law eventually became chief physicist at the British Aircraft Corporation, having worked for many years with Sir Barnes Wallis of airship, geodesic bomber, bouncing bomb and swing-wing fame. Finally, to complete the circle, Tony’s brother-in-law returned to Cornwall, where he works in advanced magnetics.

Our speaker Tony Hadland was born in 1949 in Reading. Tony has also lived in Oxford, South Oxfordshire and the Vale of White Horse. He spent thirteen years in the West Midlands, literally having been sent to Coventry by his employer. He studied architecture at the Oxford School of Architecture and surveying at Reading College of Technology. Tony is a Fellow of the Royal Institution of Chartered Surveyors; a historian specialising in local, family, recusant and cycle history; honorary president of the Moulton Bicycle Club; and chairman of the Oxfordshire
Local History Association. Between 2004 and 2009 he was administrator of the Vale & Downland Museum. He has written, edited and contributed to a number of books and has had many articles published in magazines and
journals. He has made numerous appearances on radio, particularly in recent years on BBC Radio Oxford, and has also appeared in documentary films and on regional TV. His most recent book, co-authored with Professor Hans-Erhard Lessing, is Bicycle Design: an illustrated history, published by MIT Press. He has a website at hadland.wordpress.com.

Tony has spoken to us before, and his talks are always well received!

The talk is at Exeter Hall, Oxford Road, Kidlington, Oxford OX5 1AB. Doors open at 7:15pm for coffee, the bookstall and genealogy and computer help. The talk will be at 8pm. More information at www.ofhs.uk Non-members are welcome as well as members – we’ll be pleased to see you!