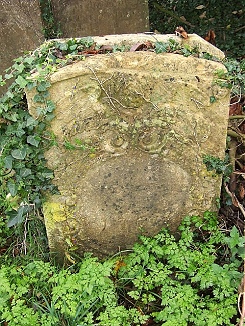 The latest release in the Oxfordshire Family History Society series of illustrated monumental inscription CDs is for the church of St John the Evangelist at Hailey, now one of four churches within the parish of Witney.

The chapel was demolished after the present church was consecrated in 1869 but its graveyard remains with many of the stones still readable, including the one shown here which commemorates Daniel Godfrey, who was buried on 18th September 1761 and who may well have been the first person to be buried in the chapel graveyard.

The CD costs £6.00 plus postage and is available through the OFHS shopping cart, or by cheque – along with many similar CDs for other parishes.

A similar CD for St Mary’s church at Witney was published several years ago and many of the team members who recorded the monuments at Hailey are now busily recording at another of the Witney parish churches, Holy Trinity, at Woodgreen, Witney. Watch this space!