You are here: HomenextNewsnextDr Hugh Kearsey 1931-2020 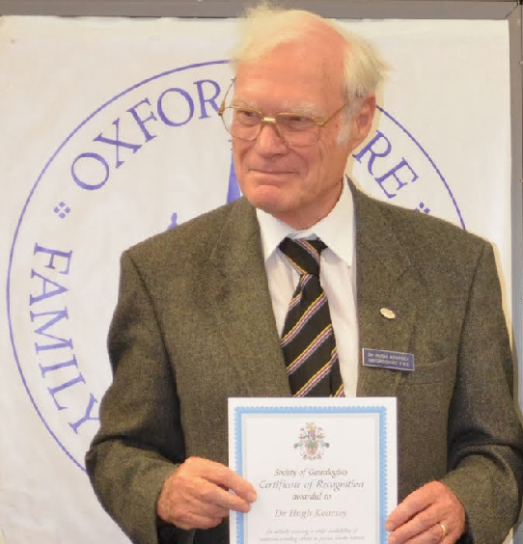 The Society is saddened to report the death of Hugh Kearsey, our President, in late July.  Hugh had been President since 2002, but, prior to that, had served Oxfordshire Family History Society as an Executive Committee member, as Chairman, and then as a Vice-President.  He had remained on the Committee until 2009.  He had also been Chairman of Gloucestershire Family History Society, the county in which he and his wife Jean lived in retirement.

It had been Hugh’s initiative of having the parish register transcript collection, which had built up from the early days of the Society, copied to microfiche, which revolutionised Oxfordshire family history research.  Researchers county-wide, country-wide, and, indeed, worldwide could participate from home in researching their Oxfordshire ancestry. I remember, in early 2000, Hugh proposing to the Executive Committee that the fiche be scanned and put on CD.  The CDs the Society sell today, 20 years later, have been edited by Hugh.

As Projects Officer, many other projects were completed by Hugh, primarily bringing to fiche and then to CD and also to the Search Services county-wide census transcripts and indexes, and the baptism, marriage and burial indexes.

It was very fitting that, in 2013, the Society of Genealogists awarded Hugh a Certificate of Recognition for “actively ensuring a wider availability of materials enabling others to pursue family history in Oxfordshire and Gloucestershire.”  This photograph of Hugh was taken on that occasion.

From the many tributes about Hugh, some sent to Malcolm Austen, our Chairman, and others posted on our Facebook page, I have chosen three, from long-standing Society members.

From Jean Hodges, in Wrangle, Lincolnshire, UK: “A lovely, kind and very helpful man. He will be sadly missed.”

From Sue Matthews, in Abingdon, Oxfordshire, UK: “He will be greatly missed. He was the first person to welcome me to OFHS nearly 30 years ago. He never changed in all that time. The Open Days will never be the same.”

From Carole Newbigging, in Kennington, Oxford, UK: “I am so sorry to hear this. Hugh was a major part of OFHS for so many many years. His contribution cannot be over estimated. A lovely man.”

Our thoughts are with Jean, Hugh’s wife of nearly 65 years, and past Membership Secretary of OFHS, and their family.