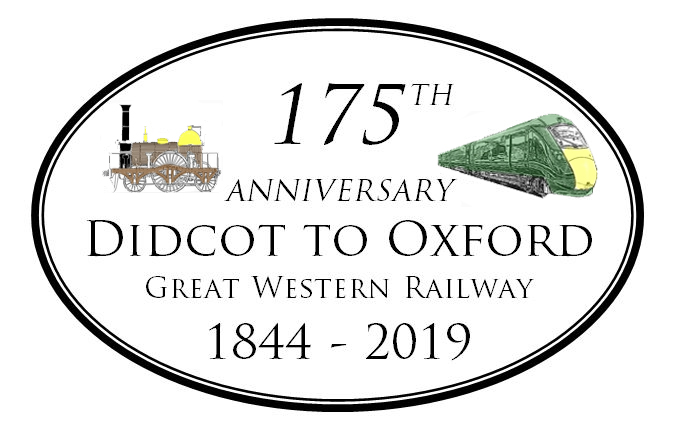 Ofhs members should think of visiting events to do with the 175th anniversary of GWR Didcot to Oxford railway line, Saturday 15th June 2019. Have a look at the following from the organisers of the events: –

‘Join us on Saturday 15 June for celebrations all along the Didcot to Oxford line!

The Didcot to Oxford Branch of the Great Western Railway opened in June 1844 and we’ll be celebrating its 175th anniversary with events at or near all five stations along the line – Didcot, Appleford, Culham, Radley and Oxford – on Saturday 15 June 2019.

The railway came rather late to Oxford, mainly due to opposition from the University which feared for the morals of its students. In particular it was very worried about providing undergraduates with easy access to London, where they might be involved in “improper marriages and other illegitimate connexions”. After several years – and two failed parliamentary Bills – the University finally dropped its opposition when it was agreed that its officials could patrol the station and physically prevent students from travelling to unsuitable destinations. Moreover, the Act of Parliament giving permission for the branch line stated that the Great Western could sell undergraduates tickets only to approved stations, and not to places like Ascot and Henley.

The opening of the line to the public on 12 June 1844 caused enormous excitement and great crowds gathered in areas adjacent to the railway. Thousands of people watched enthralled as the first public train arrived from Didcot:
“…one of those rampageous, dragonnading fire-devils … arrived at a sufficiently astonishing rate, and though gasping for breath and shining with heat, seemed to have turned not one hair more than was deemed proper by each spectator, even after its long and whirlwind chase.” (Jackson’s Oxford Journal, 15 June 1844)

Join us for an equally exciting day on Saturday 15 June. You’ll be able to buy a special GWR ticket to take you from one station to the next, and included in the price will be discounted entry to the Didcot Railway Centre. There it’ll be a special Steam Day, with locomotives which served on the Didcot to Oxford line on display. At Appleford’s steam-themed fête there’ll be a beer tent and barbeque; at Culham you can explore the 1844 Brunel-designed ticket office; and at Radley you’ll be able to hear story tellers relating tales about the village and the railway. At Oxford we’ll be based in Grandpont, very near the site of the city’s first (1844) railway station, and you’ll be able to enjoy rides on miniature trains, working model displays, exhibitions about the history of Oxford’s railways, and free guided walks to the nearby LMS swingbridge, a national Scheduled Monument.

Take part in our photo competition What does the Didcot to Oxford railway mean to you? from 19 April to 30 May. Fabulous prizes to be won! Further details at www.didcotoxfordgwr175.org/competition.html

It looks a very exciting day.