You are here: HomenextAll EventsnextPut That Light Out! Air Raid Precautions and air defences in wartime Oxfordshire.

Put That Light Out! Air Raid Precautions and air defences in wartime Oxfordshire. 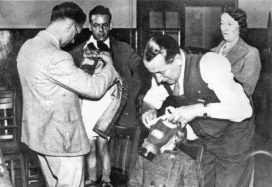 by Malcolm Graham; this talk commences at 8.00pm.

The talk aims to cover both civilian and military activity. It, therefore, covers the work of air raid wardens and civil defence personnel, the effects of the blackout, protection from gas attacks, public and private air raid shelters as well as the use of bombing decoys, camouflage, anti-aircraft batteries.

Malcolm Graham is an Oxford local historian, now retired after a professional career as local studies librarian and then Head of Oxfordshire Studies with Oxfordshire County Council. He has published many books and articles about the city and county, including Oxfordshire at War about the county in the Second World War in 1994 and, in 2014, Oxford in the Great War. When he retired in 2008, he was honoured to be made one of Oxfordshire Family History Society’s Vice-Presidents for his work in improving the county’s services for family historians. Since then he was elected its President in 2021, the same year as he was given an Award for Personal Achievement by the British Association for Local History in recognition of his contribution to local history in Oxford and Oxfordshire.

The hall will be open from 7.15 p.m. for refreshments, to browse books and to consult advisors about family history problems. Non-members can attend but there will be a small charge of £2 per head towards the society’s expenses.