You are here: HomenextAll Eventsnext‘Princes of Plants’: the Bobart family and Oxford’s 400-year-old Botanic Garden 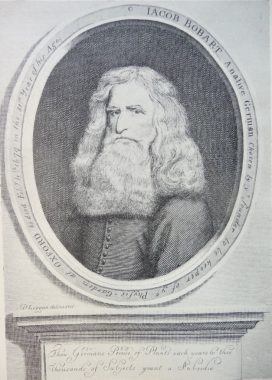 by Mark Davies; this talk commences at 8:00pm. It will take place via Zoom.

Oxford University’s Botanic Garden, the oldest in Britain, was founded in July 1621. Jacob Bobart, the ‘German Prince of Plants’, was the first keeper, famed both for his horticultural skill and his eccentricities. His sons were Jacob, ‘horticulture’s sapient King’, and Tilleman, overseer of the grounds of the new Blenheim Palace, while a later descendant became mayor of Woodstock and another was celebrated in fact and fiction as Oxford’s ‘Classical Coachman’. Some of the important visitors and events associated with the Garden will also be featured, including Ashmole, apes, aeronauts and ‘Alice’.

OFHS member Mark Davies is an Oxford local historian, guide and author, whose interests tend to focus on non-University aspects of the city’s history: Town rather than Gown. However, while researching his biography of the Oxford pastry cook-cum-aeronaut, James Sadler (‘King of all Balloons’), the pivotal role of the University’s Botanic Garden led him to investigate some of the other significant people associated with the Garden through time. Mark’s other main published interests are the historical and literary importance of Oxford’s waterways and Oxford Castle, and the historical realities which underlie Lewis Carroll’s ‘Alice’. He is the Oxford rep of the Lewis Carroll Society, on the committee of the Alliance of Literary Societies and Chair of the Jericho Living Heritage Trust.

The Oxford Botanical Garden was founded in July 1621. This talk takes place almost precisely 400 years later. There will be a number of other events celebrating the foundation. A link to these will be provided closer to the anniversary.