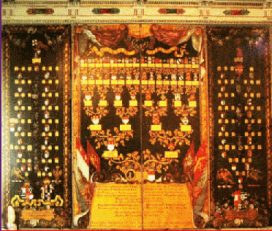 by John Frearson; this talk commences at 8:00pm. It will take place via Zoom.

Establishing the truth of a WWI friendship between two Wiltshire farmers’ sons, and why one’s marriage to the sister of the other, led to the unexpected discovery of an 18th Century Grant of Arms, several 18th Century family trees, crested china and a signet ring. Also an 18th Century print of the College of Arms where a family namesake was Richmond Herald. The story of the fortunes of this family of farmers descended from Merchant Mariner adventurers provides a fascinating insight into the 18thC and their descendant families are searched for the linkage that would show why that cache of 18th Century material descended to its present owners.

John was born in Oxfordshire at Witney, and lived in Oxford until he was 16, later returning to New College to read Chemistry [unsuccessfully] and Geology [slightly more so!]. He is now a retired concrete and construction materials consultant, turned family, local and company historian, researcher, lecturer and author, living in Rugby. He has written some 15 family and local history booklets, gives talks to local groups – and some not so local, the most distant was at Arnhem, and spoke twice at the former ‘WDYTYA?’. You will recall from his last talk to us he was a keen Morris Man and has danced the Morris, mainly with Bedford Morris Men, both in UK and in Belgium and Germany and as a guest of many other Sides around the country – and even in Hong Kong!

This talk will be recorded and the recording placed in the Members’ area of the website.