You are here: HomenextAll EventsnextHow do I find out about my Methodist ancestors?

How do I find out about my Methodist ancestors? 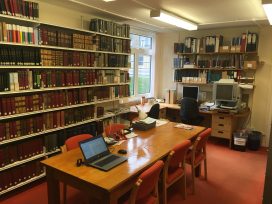 by John Lenton; this talk, which will be given with particular reference to using the Wesley Historical Society Library at Oxford Brookes University, commences at 8:00pm. If Exeter Hall is not open, the talk will take place via Zoom.

The paper briefly explains Methodist history for genealogists, showing what genealogists need to find out to trace their Methodist ancestors. It explains where Methodists were strongest and weakest and why, reasons for their growth, and why they divided and united again. The organisation is explained so that it can be understood what records can be found, why they were made, and how they can be useful to the genealogist and where to find them. The chief helpful websites are listed and explained, also how to use books of reference such as Hills Arrangements and the Minutes of Conference. Local records such as circuit plans are also looked and societies such as the Society of Cirplanologists.

John Lenton is the Honorary Librarian of the Wesley Historical Society Library at Oxford Brookes University. A History graduate from Oriel College, Oxford and an active Methodist Local Preacher, he was Deputy Headmaster of Charlton School, Wellington, Shropshire from 1974 to 1995. From 1996 to 2010 he was Convener of the British Methodist Church’s Archives and History Committee. His publications include Harold Roberts (1995), “My Sons in the Gospel” (2000), John Wesley’s Preachers 2009, and many articles on Methodist history, particularly women’s history, on which he organized a successful conference at OBU last November. He gained a PhD by publication from Oxford Brookes University in 2010. He has always been interested in genealogy and has for the last forty years concentrated on Methodist genealogy. His articles on it include “Some printed donation lists” in the Proceedings of the Wesley Historical Society vol 55 (2005) and “Men who left the Wesleyan Ministry 1791-1932 a database in progress” in Brands Plucked from the Burning ed Hart and Jeremy (2013). He has twice lectured on the subject of Methodist genealogy to the Society of Genealogists.

We hope to meet at the Exeter Hall, Oxford Road, Kidlington, OX5 1AB, with the talk starting at 8:00pm. Doors open at 7:15pm, when there will be advisors offering computer and genealogy help. Tea and coffee will be available. Non-members are very welcome, though we have a charge of £2 as an entrance fee for them to contribute towards the hire of the hall and the costs of speakers.

If this is not possible because of COVID-19, the talk will be conducted via Zoom. OFHS members will be contacted in advance if this is the case.