You are here: HomenextAll EventsnextFelons, fellows, and females: the completion of the Oxford Canal

Felons, fellows, and females: the completion of the Oxford Canal 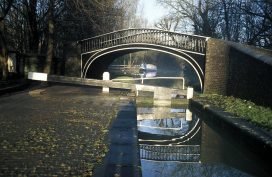 by Mark Davies; this talk commences at 8.00pm.

The majority of the original shareholders of the Oxford Canal Navigation Company were from Oxfordshire, and a small number were women, several of whom have intriguing family connections, from both academic and trade backgrounds, both Town and Gown. They contrast in social standing to the convicts whose cost-effective employment in various aspects of canal construction made the shares all the more affordable and valuable!

Mark Davies, a member of OFHS, is an Oxford local historian, guide and author. As a resident of a narrowboat in Oxford for nearly 30 years, Mark’s initial historical interest was in the city’s waterways, both from a social and cultural angle, and the investigation of the nature of the canal’s original backers represents a new progression of that interest. Mark’s related other specialities include Oxford Castle and Lewis Carroll’s ‘Alice’. He is the Oxford rep of the Lewis Carroll Society, on the committee of the Alliance of Literary Societies and Chair of the Jericho Living Heritage Trust.

The hall will be open from 7.15 p.m. for refreshments, to browse books and to consult advisors about family history problems. Non-members can attend but there will be a small charge of £2 per head towards the society’s expenses.